Oslo International Airport (Gardermoen) has been expanded with a terminal and a pier, significantly increasing its capacity. With its wooden construction, the extension ties in with the existing architecture of the airport. The roof structures of the terminal and the pier were realised with glulam. In addition, the roof of the new pier Pir North received a cladding of oak slats. The construction method is thus in line with the Norwegian orientation of increasingly relying on wood as a renewable raw material in public building projects.

Oslo Airport Terminal
at a glance

The new terminal extension measures 91 m x 126 m and thus has a floor area of almost 12,000 m2. Due to the multi-storey nature of the construction, the airport will have an additional 52,000 m2 for passenger handling once the extension is completed. Spanning these dimensions requires enormously large components. The supporting structure consists of seven main axes, each with a pair of trusses at a distance of 3 m and a total length of 91 m. The support spacing is 54 m.

The airport terminal in Oslo received the BREEAM certification “Excellent”. This is the first award for an airport worldwide.

The advantages of wood
in the Oslo airport terminal

By choosing wood as a material, the terminal was adapted to the existing airport building. The specification that the extensive building project must be implemented during ongoing operations and on schedule also played an important role in the decision to use wood as a building material: the very high and precise prefabrication of the wooden components means that assembly on site can be carried out quickly and reliably. In addition, the choice of material fulfilled the Norwegian requirement to rely increasingly on wood in public building projects. The aim of the project: to build as environmentally friendly and energy-saving as possible. The natural building material wood has completely fulfilled this goal.

The trusses were completely prefabricated in Germany, packed and transported to Norway with special vehicles. On site, three segments were connected one behind the other and two beams were pre-assembled next to each other. This massive main girder was then 25 m by means of two cranes in a single operation onto the support structure. The first girder was erected in January 2013 in driving snow and minus 8° C.
Due to the tight space conditions on the construction site, the components were delivered just-in-time – and over a distance of 1,300 km. At the beginning of February 2014, the last large girders for the new terminal building at Oslo-Gardermoen Airport were delivered.
Three special vehicles each with a total of 105 tons of cargo drove in convoy with police escort to the ferry port in Kiel. There we continued via ferry to Oslo, where the porters were transported the last 50 kilometres by road. The weather conditions in Norway were a particular challenge – heavy snowfall made snow chains necessary for the entire trucks.

Why was DERIX
chosen as the provider?

The DERIX-Group was able to win the contract against a Norwegian competitor, among others, because with four joinery plants we have the world’s largest capacity in the area of precise cutting and processing of large components in glulam. On the largest joinery plant in the world, components with a width of 5.5 m and a length of up to 80 m can be processed in one piece. This convinced the client, as the requirements for cutting, fasteners and accuracy are extremely high. 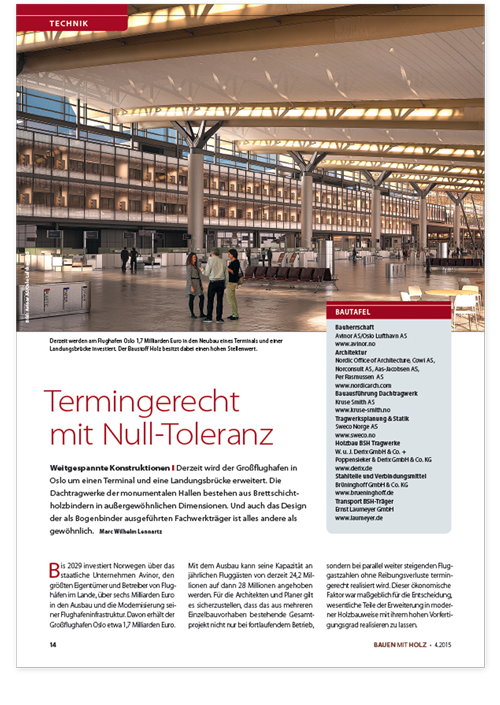 With our glulam, individual constructions can be built, because we produce the components in almost any shape and size – entirely according to your wishes. The kiln-dried wooden boards are joined together by finger-jointing to form long lamellas. Discover our diverse range of glulam.

Your partner for timber construction

With DERIX as a strong partner at your side, you will implement your construction projects sustainably and efficiently.

Register now and get exclusive access to extensive specialist content. Use our helpful digital service tools such as our X-LAM Designer and stay well informed with our newsletter.
register now